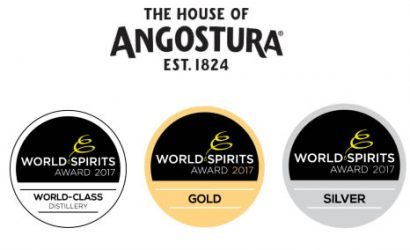 In a stellar performance, The House of Angostura has been awarded the coveted title of World Class Distillery 2017 at this year’s World Spirits Awards (WSA), as well as Gold Medals for five of its rums and for its newest distillation: Amaro di ANGOSTURA®.

Only 25 distilleries around the world are named World Class by the WSA. To qualify as “World Class” the distillery must be awarded 92-100 points.

Amaro di ANGOSTURA® which has taken the Amaro market by storm also received a Gold Medal from the WSA for the second year in a row, with judges noting the drink’s “coherent herb and root mixture… sumptuous sugar sweetness [and] delicate pepper-chilli hotness,” which make it unique in the class.

Established 14 years ago, the World Spirits Awards prides itself in setting the ultimate benchmark in the world of spirits using a transparent, accurate 100-point WOB evaluation system. The competition is themed “Simply the best in spirits,” and relies on the unsurpassed quality of its jury, which is meticulously trained and highly qualified.

“The House of Angostura appreciates this honour,” says Chief Executive Officer Genevieve Jodhan, “We take deep pride in our almost 200-year history of quality, creativity and innovation and we are extremely pleased to be recognised by the WSA.”